Kick-Ass Ways to Change Your Habits like a Ninja! 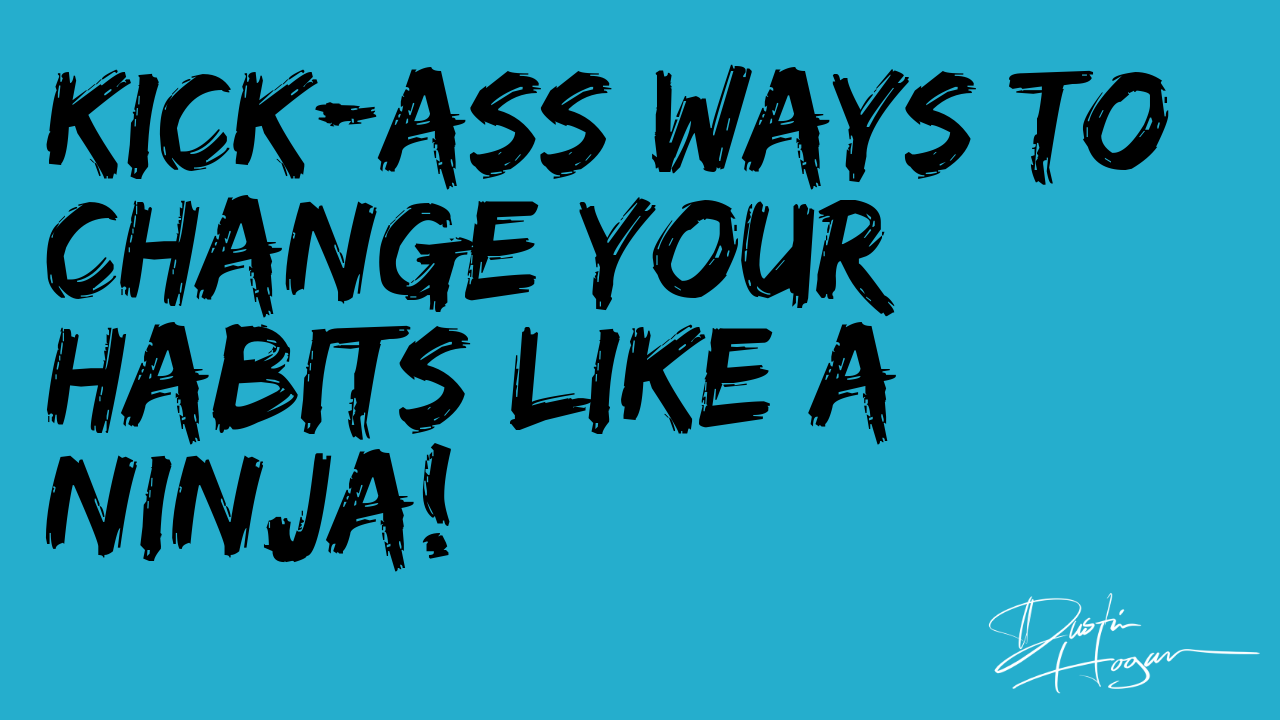 How Long Does it take to Form a Habit?

Building new habits can be hard!

We often want the results that come from building positive habits but don’t realize that building a habit is a process, not an event.

But have you ever considered how long it actually takes to form a habit?

There are many common theories and ideas about how long it takes to form a habit.

Most often I have read and heard that it takes 21 days to form a new habit.

I assumed that because of how many times I have heard it takes 21 days to form a habit that this number must have been determined through some sort of scientific research.

Funny enough, the idea that it takes 21 days to form a new habit isn’t based in science whatsoever. It is an idea that has developed over the last 60+ years in what seems like a massive game of telephone.

Stick with me here for a second…

Back in the 50’s, there was a plastic surgeon named Maxwell Maltz who started to notice some patterns among his patients.

When Dr. Maltz performed an operation like a nose job or even an amputation, he would notice that it would take about 3 weeks, or 21 days, for his patient to become used to their new situation.

He then extended this theory to other things like getting used to a new home, new job, new routine, etc.

In the case of Dr. Maltz, he didn’t simply just state these theories and observations to some colleagues, he shared these observations in his book called Psycho-Cybernetics which sold 30 million copies!

Based on the popularity of his book, Dr. Maltz’s personal observations were taken as fact and have created this idea that habits take 21 days to form.

A lot of personal development gurus like Zig Ziglar, Tony Robbins and Brian Tracy have based much of their work on Dr. Maltz’s work and as a result helped to spread the myth that it takes 21 days to create a habit.

So, if the idea that it takes 21 days to form a habit is a myth, how long does it really take?

In 2009 the European Journal of Social Psychology set out to determine how long it actually takes to form a habit. Let’s just say this…the findings of the study weren’t 21 days!

The study followed 96 participants over a 12-week period. These participants each chose a different habit and reported every day if they did the behaviour and how easy it felt to them.

After the 12 weeks were up, researchers analyzed the data to determine how long it took to form a habit.

On average it took participants 66 days to form a new habit – over 2 months!

And even more interesting is the range was anywhere from 18 to 254 days to form a habit!

So, in other words, expect it will take you anywhere from 2 to 8 months to build a new habit into your life – not 21 days!

Sorry to burst your bubble, but building any habit worth building may take a bit longer than you anticipated.

This shouldn’t be something to get frustrated with because like I said earlier, it’s not like you start on day 1 with no habit and need to wait until day 254 to have a habit. The habit is built gradually over time by getting started and being consistent. Then momentum will carry you forward until it becomes an unbreakable habit!

With the understanding that the average time it takes to form a habit is 66 days, what can you do to make breaking bad habits easier?

It comes down to something called The Habit Loop.

We’re going to get a bit sciencey (is that even a word? 😁), so stick with me.

In the 1990s, researchers at MIT discovered a neurological loop at the core of every habit – the habit loop.

The habit loop is made up of three parts: a cue, a routine, and a reward. Understanding these elements teach you how to change bad habits or form good ones. This image is based on the Habit Loop diagram in Charles Duhigg’s book The Power of Habit. 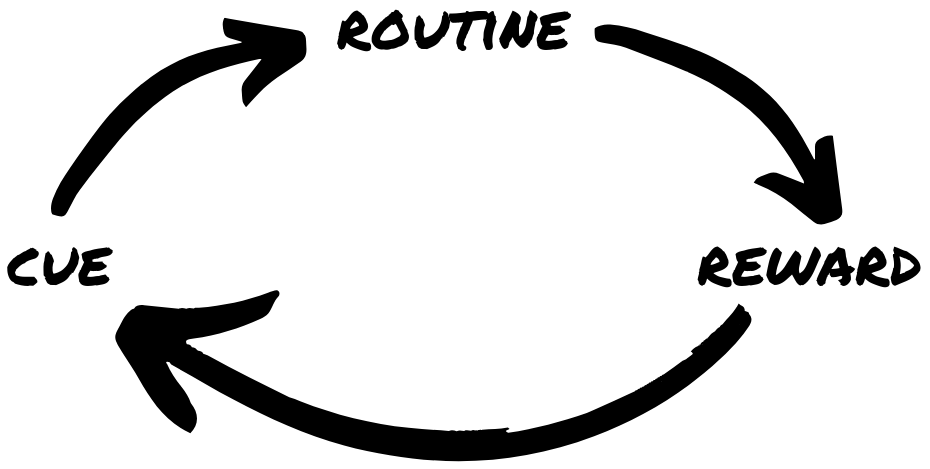 The cue for a habit can be anything that triggers the habit. The routine is the behaviour itself and the reward is the reason you’re motivated to do the behaviour.

For example, if your bad habit (the routine) is overeating food after work, the cue might be you being tired after a long and challenging day at work, and the reward may not be the food itself but rather, socializing with coworkers after work.

The mechanics of the habit loop are no different for “good” or “bad” habits. It is up to YOU to decide if the “Reward” impacts your life in the way you want it to. Only you decide what is good and bad.

The Cue
The cue tells the brain to go into automatic mode and which habit to use. It takes effort to resist the cue, versus deriving satisfaction from following the cue.

Cues fall under certain conditions: a location, a time of day, other people, an emotional state, or an immediately preceding action.

I have “good” and “bad” in quotations because those terms are subjective and mean different things to different people. I am simply demonstrating that the cue part of the loop is no different for habits that the majority of us would classify as “good” or “bad.”

The Routine
A habit's routine is the most obvious element: it's the behaviour you wish to change (e.g. smoking a cigarette or biting your nails) or reinforce (e.g. taking the stairs instead of the elevator or drinking water instead of snacking).

The Reward
The reward is the reason the brain determines the previous steps should be something to remember for the future.

The reward provides positive reinforcement for the desired behaviour, making it more likely that you will produce that behaviour again in the future.

Rewards can be many different things. The reward could be something tangible like tangible (e.g. pizza), something intangible (e.g. a connecting with friends) to something with no actual value other than what is given (e.g. trophy).

But the big question is how do you change a bad habit that you know isn’t serving you? Where do you start in the habit loop?

If it were only that easy…

The truth is there are formulas for breaking and building habits. The thing is though, there are 1000’s of formulas!

And choosing which formula to use depends on the individual, the type of habit, whether it is a habit you want to build or break, and the list goes on.

Thankfully, there is a powerful framework that was developed by Charles Duhigg, the author of The Power of Habit, that gives us a good foundation to begin with.

To understand our own habits, we must first identify the components. Once we have identified the individual components of a specific habit loop, we can begin making adjustments.

His framework is as follows:

Step 1: Identify the Routine
This step is the easiest because the routine is the behaviour you want to change. Determine what bad habit you want to break.

Step 2: Experiment with Rewards
This one is a bit trickier because it can be hard to recognize rewards in something that you may know is a bad habit. However, once you take a closer look, things tend to make a bit more sense.

So, what you would do is that when you feel the urge to bite your nails, you would replace the routine (habit) of biting your nails with something that still gives you the reward of a momentary escape from stress. This could be calling a friend, reading a magazine article, going for a quick walk, etc.

The idea is to determine what the reward is and replace the bad habit with a good habit that still allows you to reap the reward you’re craving.

Step 3: Isolate the Cue
Determining what the cue is, allows you to be proactive in recognizing that your routine (habit) is going to be triggered.

This is why it is tough to break certain bad habits like over-eating, smoking, drinking, etc., because there are multiple cues. You’re often fighting a battle that is difficult to win.

When you feel the urge to do your bad habit, ask yourself:

By answering these questions you will be able to recognize what is contributing to the urge to engage in the bad habit.

Step 4: Have a Plan
The final step is critical if you want to successfully break a bad habit.

Now that you have experimented with the rewards and isolated the cue, you have the information needed to break the bad habit.

Having a plan in place will ensure that if you’re triggered by the cue, you won’t fall back into old patterns and follow through with the bad habit (routine) that you’re trying to change.

Let’s say you’re trying to break the habit of eating too much sugar and you’ve determined that the reward isn’t the sugar, it’s actually you wanting a break at the end of the day.

You realize that the cue is time-based and usually happens right around 4:00pm. So, you decide that you feel equally rewarded in the same way when chatting with your close friend.

So, when you feel the urge to eat sugar then you’ll call your friend.

Understandably this plan will not work 100% of the time but as you continue to practice it you will start building a new habit.

Start Small: It’s a Marathon, not a Sprint

Rather than focusing on how long it takes to create a habit, what we should focus on is how long we keep the habit consistent once formed and how much of an impact it makes in our lives.

Even if the habit took 257 days to become an actual habit, but it made MASSIVE positive shifts in your life, is the amount of time worth it?

I would say the answer is yes!

The key is looking at the long-term impact a habit will make as opposed to how long it will actually take to form the habit.

Stay focused and realize that the time it takes to build powerful habits is time invested in your success!

I am very curious to hear what your biggest takeaway from this post was.

Please let me know in the comments and please share this article with 2 people you think would benefit from it.

Make sure to download The Habit Hacker: 6 Simple Hacks to Help You Build New Habits 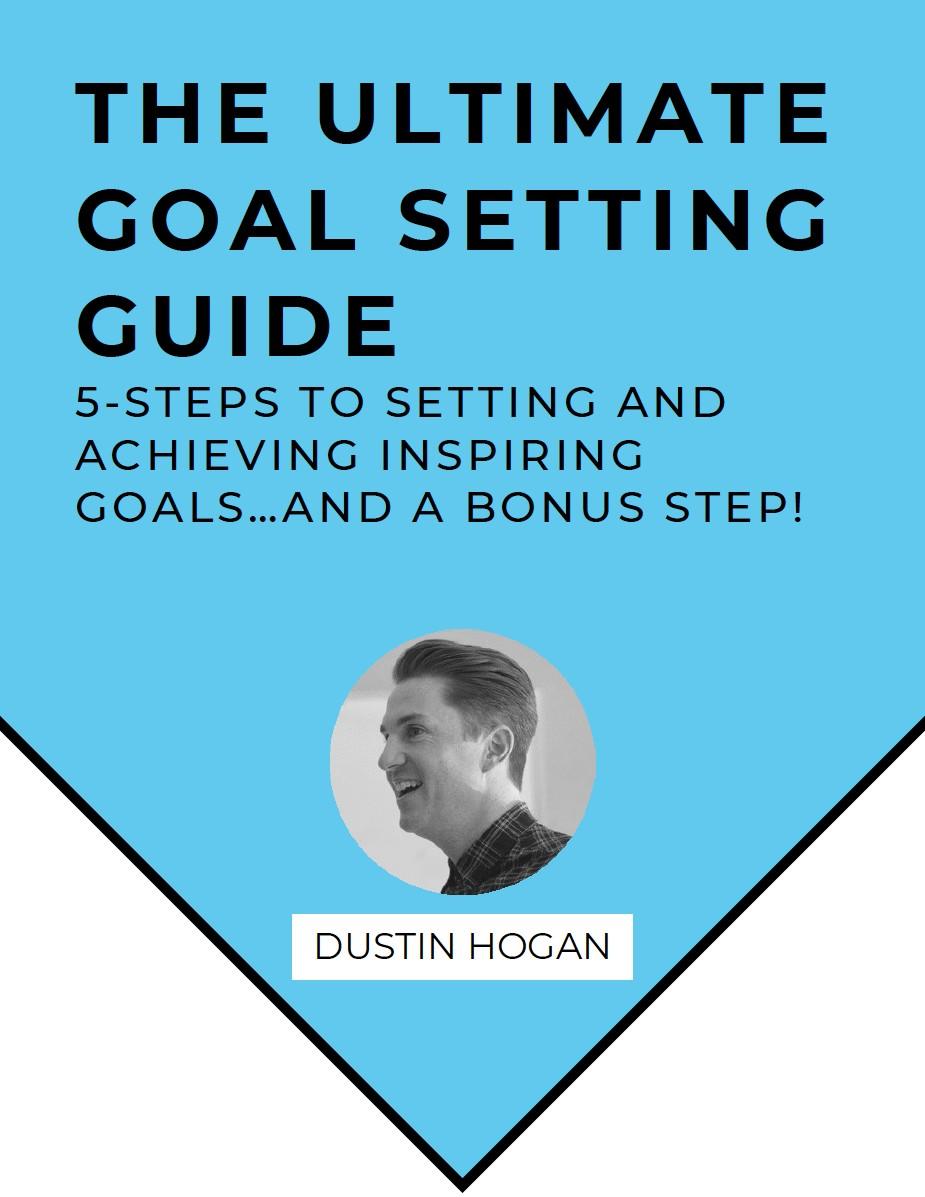